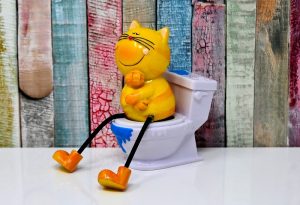 Picture this. You are in college- finally, have a place of your own. Your first adult decision? Adopting this adorable kitten you found wandering outside your parent’s house. You name him Henry and it is a story straight out of a movie. He is there for you through everything. First bad breakup. New roommates. Failing a test. That weird stomach bug that went around campus. Moving. Meeting the love of your life. Getting married. Moving again. 9 months of pregnancy. Bringing home a new baby. Now the baby is a year old and learning to walk and talk.

You notice a wet spot on the sofa and a horrible smell. Cat pee. WHAT???! No, not Henry. He would never. He has never done anything like this before. You clean it up but the smell remains. Research online leads you to the best fabric cleaner for cat urine. Your sofa is saved. A few days later you notice a yellow spot in the corner of your cream carpet. Not again. Clean it up. Same thing the next day. You are getting frustrated. Rightfully so. The significant other is getting angry. You CANNOT have your house smelling like cat urine. But what do you do? You don’t want to get rid of Henry! He was your first love. He has been there through it all. But you have tried everything? UGHHH! Well before just assuming Henry is being a “bad kitty” lets review some things that could help save your relationship is Henry…and your carpet.

First things first. There may be a medical reason Henry is urinating outside the litterbox. Bring him to your trusted vet. They will most likely want to run a urinalysis and bloodwork. Henry could very well have a UTI making it incredibly uncomfortable when he urinates. He was trying to tell you something was wrong the only way he knew how. A simple course of antibiotics should do the trick! Or maybe Henry has something a little more worrisome such as diabetes or kidney disease. Both of these things can be managed per veterinary guidelines but it could explain why Henry is avoiding the litter box. So let’s say the urinalysis and bloodwork all come back normal. Yayy good news! But wait, what about my carpet? Maybe the doctor notices some pain and arthritis in Henry’s hips. This is certainly another logical explanation. Henry’s hips are painful and sore making is very difficult to climb into the 2-foot tall litter box dome you got to prevent the cat litter from going everywhere. In this situation, a shorter litter box that is easy to get in and out of would be a great solution. Maybe your veterinarian will recommend adding in a joint supplement to help as well.

Okay, so worst case scenario. The doctor gives Henry a clean bill of health and can find no medical reason for Henry’s litter box aversion. Don’t panic- we still have options! It is safe to assume that there is some kind of stress present in Henry’s life that is causing this issue.

Could is that you switched cat litters because this new brand was on sale? Cats can be very particular about their litter. Most prefer a clay-based litter that is unscented. With so many litters on the market and so many scents, it can be hard navigating the cat litter aisle. My advice- you find a winner, you stick with it. Find a litter that is easy to clean and that Henry likes and don’t change it up.

Could it be that life has been crazy since the baby has been on the move and the litter box hasn’t been cleaned as regularly? Cats want a clean bathroom the same way you do. Regularly scooping is vital. It is also recommended to dump and scrub the litter box weekly. Mild soap and warm water will work perfectly.

Could it be the neighbor’s dog that you were petsitting last week trapped Henry in the litterbox for over an hour and now he is nervous about returning to it? Or there just happened to be a loud, startling noise just as Henry was entering the litter box? Try moving the litter box to a new location. Even better, try adding a second litter box. If your current litter box is a dome style, try a regular litter box with lowers sides or no top. Some cats prefer to be able to see all around them when using the bathroom. Others prefer to feel enclosed.

Could it be now that the baby is mobile and following or grabbing at Henry and he realizes that he prefers to be an only child? Babies and pets should always be watched closely. They should never be left alone! Some pets take longer to get accustomed to a new baby. Cats should have areas of the house (especially high up areas) that the baby cannot reach. Children should never be allowed to grab at, pull, or pick up the cat until they are old enough to properly interact and until the cat is comfortable with it as well. Never force the cat to interact with the child.

Other options to try include calming pheromones. There are several different brands and styles on the market. Some are a plug-in style such as Feliway. Others are collars such as Sentry Calming Collars. Others even come in treat form like Composure. Some are powders you put in the litter box that attracts Henry to the box. What works for one cat may not work for all cats so try multiple options until you find one that makes Henry happy again.

If all of this fails, talk to your veterinary about trying a prescription medication to help with Henry’s anxiety. It would also be a great idea to contact a cat trainer as well! (Yes it is not only dogs that need training). The good news is….there is absolutely hope!

Accessibility by WAH
Text Us